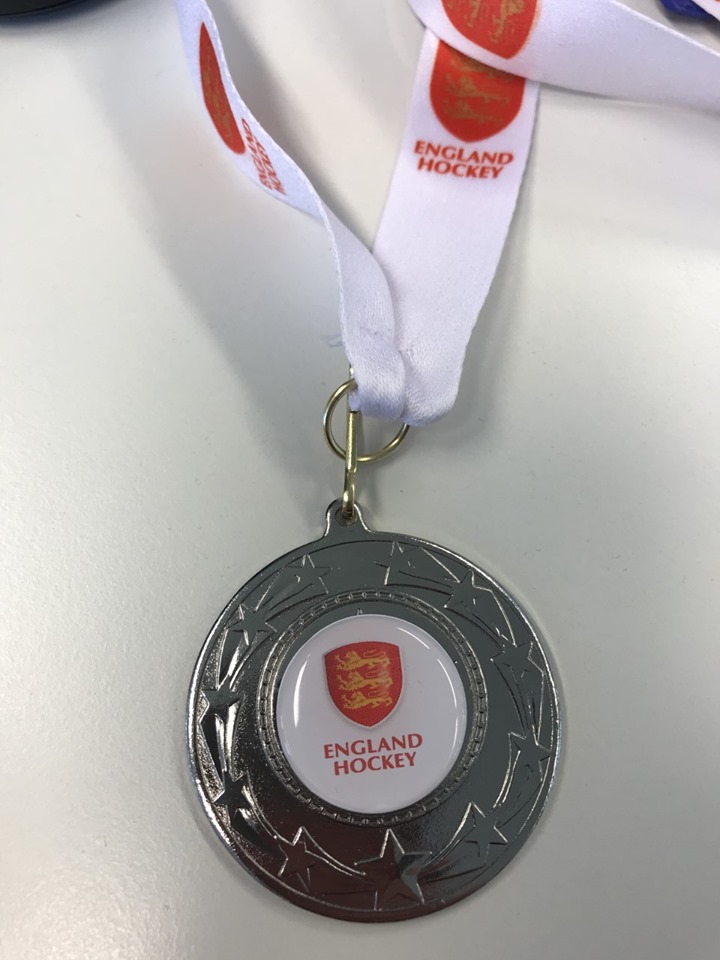 On Saturday 1st June Nottinghamshire found themselves back at the Nottingham Hockey Centre, looking to continue their unbeaten run in this year’s competition and gain promotion in to ‘A’ Division, the top-flight in County hockey.

Between them and a promotion place were the Isle of Man. These two sides have met several times over the last few years, the last meeting a gripping 5-5 draw in Bedford.

As the sun came out and with the temperature and humidity rising, Notts started strongly. Inside the first minute, Notts captain, Steve Batten, drove down the baseline towards goal and his pinpoint shot beat the Isle Of Man keeper, Will Margot, to put Notts 1-0 up. The game however remained in the balance and on 20 minutes the Isle of Man gained a penalty corner. Andy Whiting’s drag flick, hit the Notts post man and deflected wide. The umpires conferred and, deciding it was on target, awarded a penalty stroke. Whiting stepped up to calmly convert and the sides went into half time at 1-1.

After five strokes the score stood at 3-2 to Notts, but Notts ‘keeper, Neill Slane was getting closer to each of the Isle of Man flicks. He got a large part of the Isle of Man’s third but couldn’t keep it out. Notts then scored their fourth. Notts’ Slane finally got a full left glove to the Isle of Man’s fourth stroke and it was Notts’ James Fisher who ensured that Notts went into the final, and gained promotion, with a cool final stroke when the pressure was on.

In the other semi-final, Lancashire beat the Channel Islands 6-2 to set up a Nottinghamshire v Lancashire final.

With promotion already secured, and with the sun beating down, Notts were quick out of the gates yet again. Notts skipper, Steve Batten, again driving down the baseline saw his pull back across goal hit a Lancashire foot. The resulting penalty corner calmly dispatched low to the Lancashire ‘keeper’s right, by Sam Dixon, to put Notts 1-0 up inside 3 minutes. But Lancashire remained calm in their play and on 9 minutes scored from free play. On 20 minutes, during a superb smothering save by Notts no.2 ‘keeper Jason Ward, Ben Docherty was controversially adjudged to have deliberately impeded the Lancashire forward whilst clearing the rebound and a penalty stroke was awarded, but no personal penalty. With Notts losing their cool, Lancashire increased their lead just 2 minutes later. Notts regrouped and after a short team talk by captain Batten, regained their calmness and began to get themselves back in to the game, just as half-time arrived.

Within 5 minutes of the restart Notts had reduced the deficit to one, with another classic Sam Dixon penalty corner goal, before Lancashire regained their two-goal advantage through a penalty corner of their own. With Lancashire legs tiring, Notts were now applying all the pressure, limiting Lancashire to speculative long balls and deep aerials to relive the pressure on their defence. With 12 minutes to go, Notts young star, Jude Chapman, broke through the Lancashire defence and his quick thinking saw him create the necessary space to catch the Lancashire ‘keeper by surprise and slot the ball past him to bring Notts back within one. Could it be Notts turn for a comeback? Chapman then hit the post, the ball bouncing back onto a defender’s foot for a Notts penalty corner. The resulting Sam Dixon penalty corner was deflected by Chapman and his quick thinking saw him knock the rebound from the ‘keepers save back past him, only to see it agonisingly hit the post again. A reckless challenge from a Lancashire full-back was punished with a 2 minute green card, when almost all were expecting a 5, or even 10, minute yellow card. Notts pulled ‘keeper Ward with 5 minutes to go, but Lancashire’s experience in the dying minutes showed and they managed to hold out to win 4-3.

Overall this has been a great campaign for Notts. Our aim/long term plan was to make it to Finals day – we went one step further and gained promotion. The squad over the Preliminary tournament and Finals day was made up of 9 separate clubs, that brings about its own challenges, but with a sympathetic coach, guiding the squad to play to their strengths who knows what might happen next year when we take on the might of the ‘A’ Division counties!